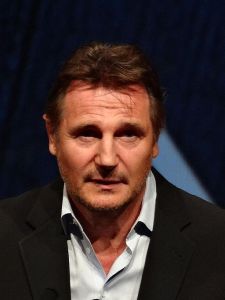 With Taken 3 lurking on the horizon, it’s time to look at the past, present, and future of this badass franchise.

Taken (2008) : Albanian flesh peddlers kidnap Liam Neeson’s daughter. A distraught and angry Neeson uses “a very particular set of skills” and some badass dialogue to rescue his child. In the process, some fifty Albanians are killed, most of them fatally.

Taken 2 (2012): Vengeful Albanians seize Neeson, his wife, and his daughter, who begins to wonder if touring Europe is perhaps overrated. Once again, Neeson uses his very particular skills to free himself and his family. In the process, he kills additional Albanians and roughs up a Macedonian by mistake.

Taken 3: Taking It on the Lam (2015): When baddies who may or may not be Albanian kill his wife and frame him for the crime, Neeson must go on the run, charged with murder and knowingly appearing in a rip-off of The Fugitive. From the trailer, it’s hard to tell if Neeson’s daughter gets abducted this time around; but honestly, Neeson should just shred the girl’s passport and lock her in her room.

Taken 4: Keep on Taking (2016) : Vengeful relatives of the vengeful Albanians slain in the first three installments hatch a plot against Neeson, even though they don’t exactly mind that he wasted cousin Besjan, who told pointless anecdotes about his goat. In this edition, the Albanians shanghai Neeson’s Shih Tzu “Tod.” To rescue the hound, Neeson must make use of very particular skills he never knew he possessed, such as a talent for playing the spoons while doing a spot-on Joe Biden impression. Tired of being locked in her room, Neeson’s daughter changes her Facebook status from “Single” to “Hoping to be chloroformed and thrown into an unmarked van.”  Neeson refuses to “Like” this post.

Taken 6: Take It Off the Top (2019): Somali pirates and a pair of peevish Albanian wannabes waylay Neeson’s hair stylist.  Tired and poorly-coiffed, the rapidly-aging Neeson threatens to annihilate the Somalis with a “a very particular set of skills that I have lying around here somewhere,” but first he has to find his car keys.  Ultimately, our hero has his lawyers threaten the pirates with a nasty lawsuit, forcing them to release Neeson’s stylist only moments before Neeson is about to cut his own hair.

Taken 7: The Musical (2023): After a four-year hiatus, Twentieth Century Fox Google relaunches the franchise by releasing the first Taken musical.  Neeson’s daughter has barely tunneled out of her room, when she is kidnapped by Mexican drug lords, who torture her with mariachi music.  This time, Neeson vows to free the girl by using “a very particular set of musical skills.” In the end, the drug cartel is blown away by Neeson’s husky, pleasant baritone and several lively dance numbers.

Taken 8: Still Taking After All These Years (2025): Vengeful relatives of the Mexican drug lords kidnap Neeson’s home health aid.  The septuagenarian Neeson is unable to respond, as he must now use all of his very particular skills just to eat pudding. Neeson’s daughter marries Shpend and they open a bed and breakfast in Tirana. An embittered Neeson disinherits the girl, who “only ever called when she was being kidnapped.”

One thought on ““Taken” To Extremes”