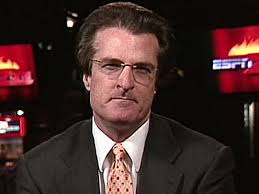 “The trainers have been working with it all week,” said ESPN NFL insider Adam Schefter. “They’ve been buffing it practically round the clock. And right now they are hopeful. But they won’t really know until Mel gets in that makeup chair on Thursday.”

Kiper’s thick, gleaming, slicked-back coiffure, beloved by millions of NFL draft fans, has been a prominent force on ESPN since Kiper joined the network in 1984. During the last few seasons, however, some have wondered if Kiper, now 54, may have lost a few follicles. Is it time for ESPN to bring in a younger mane?

“That’s ridiculous,” says ESPN analyst Ron Jaworski. “I’ve looked at hours of film of Mel Kiper’s hair, and I can’t find any cracks in it. I know it’s taken some hits. He was blindsided by that papaya mousse in ’96. But that hair has that same diamond luster, that same bowling ball sheen, that we saw when Mel was a rookie. It can play for my head anytime.”

Kiper’s hair was injured last month, when it was chipped by a falling spotlight on the ESPN set. Kiper himself has repeatedly made light of the damage. “It’s nothing. It’s a scratch,” Kiper said. “Hair injuries are a part of the game. I’ve seen Bill Polian go out there with split ends and never miss a beat.”

Schefter, for one, is confident that Kiper’s hair will be ready for Thursday. “This is Mel’s Super Bowl,” Schefter said. “If he has to slap two, three coats of polyurethane on his hair, then he will. Remember how Terrell Owens played a Super Bowl with a broken leg? Well, Mel has that same kind of toughness. He can broadcast with broken hair.”